On a visit to Pakistan with his parents, 7-year-old Aadeel Akhtar met a girl his age who was missing her right leg. That was the first time he had met a person with a limb difference. The girl’s family could not afford the cost of getting her a prosthetic leg, so she used a tree branch as a crutch to help her walk. From that encounter, Akhtar decided that one day he would develop affordable artificial limbs.

Twenty-one years later, in 2015, the IEEE member founded Psyonic, which designs and builds advanced, affordable artificial limbs. Akhtar is the CEO. The startup, headquartered in Champaign, Ill., released its first product—the Ability Hand—in September. It is the fastest bionic hand on the market and the only one with touch feedback.

The prosthesis uses pressure sensors to mimic the sensation of touch through vibrations. It functions almost like a regular hand. All five fingers on the lightweight prosthesis flex and extend. It offers 32 different grips.

“The most important thing for us is to give people a functioning, robust prosthesis that allows them to do things they never thought they would be able to do again,” Akhtar says.

The Ability Hand is available in the United States for patients age 13 or older.

Akhtar originally wanted to work with people with amputations as a physician. He earned a bachelor’s degree in biology in 2007 from Loyola University in Chicago. But while pursuing his degree, he took a computer science course and fell in love with the subject.

“I loved everything about engineering, programming, and building things,” he says. “I wanted to figure out a way to combine my interests in both engineering and medicine.”

He went on to earn a master’s degree in computer science in 2008, also from Loyola. Two years later he was accepted into the Medical Scholars Program at the University of Illinois at Urbana-Champaign. The program allows students to earn both an M.D. and a Ph.D. in tandem. Akhtar earned an additional master’s degree in electrical and computer engineering and a doctorate in neuroscience in 2016 but has not completed his medical degree.

His research for his doctorate focused on developing what eventually became the Ability Hand.

In 2014 he and another graduate student, Mary Nguyen, partnered with the Range of Motion Project, a nonprofit that provides prosthetic devices to people around the world who can’t afford them. Akhtar and Nguyen flew to Quito, Ecuador, to test their product on Juan Suquillo, who lost his left hand during a 1979 border war between Ecuador and Peru.

“Everything that we do has the patient in mind.”

Using the prototype, Suquillo was able to pinch together his thumb and index finger for the first time in 35 years. He reported that he felt as though a part of him had come back thanks to the prosthesis. After that feedback, Akhtar said, he wanted “everyone to feel the same way that Juan did when using our prosthetic hand.”

Shortly after returning from that trip, Akhtar founded Psyonic. To get some advice about how to run the company and possibly win some money, he entered the bionic hand into the Cozad New Venture Challenge at the University of Illinois. The competition provides mentoring to teams, as well as workshops on topics such as pitching skills and customer development. Psyonic placed first and received a US $10,000 prize. The startup also won a $15,000 Samsung Research innovation prize in 2015. Since then, Psyonic has received funding from the University of Illinois Technology Entrepreneur Center, the iVenture Accelerator, and the U.S. National Science Foundation.

Psyonic’s artificial hand weighs 500 grams, around the weight of an average adult hand. Most prosthetic hands weigh about 20 percent more, Akhtar says. The Ability Hand contains six motors housed in a carbon fiber casing. It has silicone fingers, a battery pack, and muscle sensors that are placed over the patient’s residual limb. If the patient has an amputation below her elbow, for example, two muscle sensors would be placed over her intact forearm muscle. She would be able to use those sensors to control the hand’s movement and grip.

The Ability Hand is connected by Bluetooth to a smartphone app, which provides users another way to configure and control the hand’s movements. The hand’s software is automatically updated through the app. Its battery recharges in an hour, the company says. 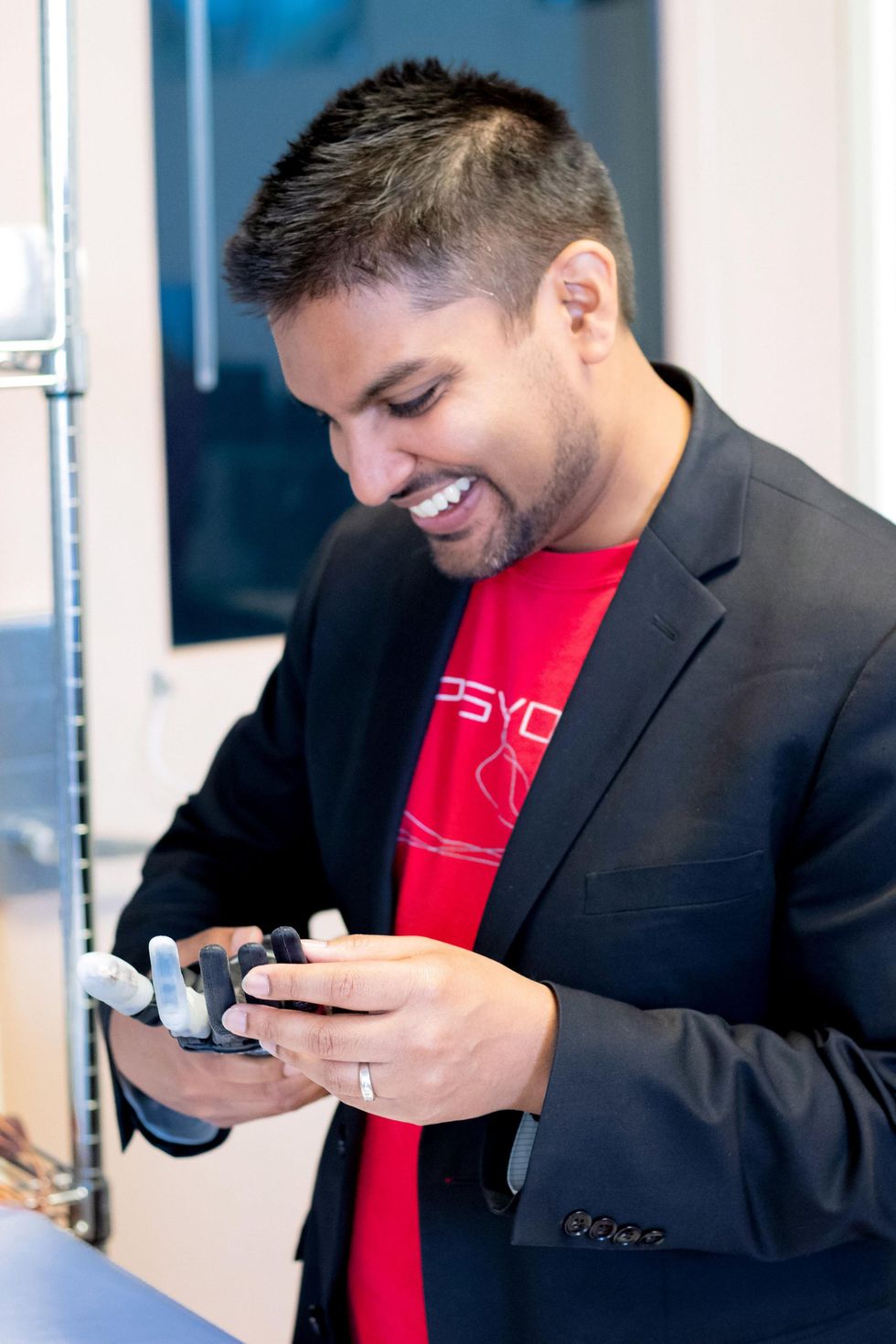 Akhtar working on the prosthetic handPSYONIC

While talking to patients who used prosthetic hands, Akhtar says, they cited issues such as a lack of sensation and frequent breakage.

To give patients a sense of touch, the Ability Hand contains pressure sensors on the index finger, pinky, and thumb. When a patient touches an item, he will feel vibrations on his skin that mimic the sensation of touch. The prosthesis uses those vibrations to alert the user when he touches an object as well as indicate how hard he has grabbed it and when he has let go.

The reason most prosthetic limbs break, Akhtar says, is because they are made of rigid materials such as plastic, wood, or metal, which can’t bend when they hit a hard surface. Psyonic uses rubber and silicone to make the fingers, which are flexible and can withstand a great deal of force, he says.

“Everything we do has the patient in mind,” Akhtar says. “We want to improve the quality of life for people with limb differences as much as possible. Seeing the effect the Ability Hand has already had on people in such a short time span motivates us to keep going.”

Psyonic and its partners are researching how to improve the artificial hand. Akhtar says some of the partners, including the Ryan AbilityLab in Chicago and the University of Pittsburgh, are developing brain and spinal cord implants that could help patients control the prosthesis. The implants could stimulate the areas of the brain that control sensory intake. When a patient touches the prosthesis’s fingers, the implants would send a signal to the brain that would make the patient feel the pressure.

Akhtar joined IEEE in 2010 when he was a doctoral student.

IEEE provides a great “ecosystem,” he says, on prosthetic limbs and robotics, and “it’s amazing to be part of that community.” He adds that having access to IEEE’s community of scholars and professionals, some of whom are pioneers in the field, has helped the company gain important feedback on how it can improve the hand, as well as help in the development of legs in the future.