Brain Implants With The Potential To Restore Vision To The Blind

Thanks to the work of scientists from the University Miguel Hernández, we are now further along the way to restoring vision for the blind. In October, Fernández et al. successfully implanted an array of microelectrodes into the visual cortex of a fifty-seven-year-old woman who has been fully blind for the past sixteen years. After training, the woman could visualize several complex patterns and identify some letters. This demonstrated the potential of array microelectrodes for restoring some form of rudimentary vision.

The ability to restore vision is one of the holy grails of regenerative medicine. I have previously written about the potential of optogenetics in this field, but this study presents real progress for an approach using direct electrical stimulation in the brain instead.

Close your eyes and rub your eyelids. What do you see? Most people will report seeing multi-colored dots or patterns of light. These dots of light are called phosphenes and are what researchers aim to induce in blind patients as a form of rudimentary vision. Past studies have used electrical stimulation directly on the surface of the brain to induce phosphenes in blind individuals. However, there were significant limitations to this approach. When multiple electrodes were stimulated at the same time, the phosphenes would blur together rather than create two distinct shapes or dots. This made shape recognition difficult, if not impossible.

To address these issues, Fernández et al. experimented with an array of electrodes that penetrate deeper into the brain. The theory was that if the electrodes could initiate the activity of neurons deeper in the visual cortex, they would not require as much current to induce phosphenes in the patient’s vision. Electrodes with less current could also safely be placed closer together and potentially increase visual resolution. This would allow patients to distinguish discrete shapes and patterns. 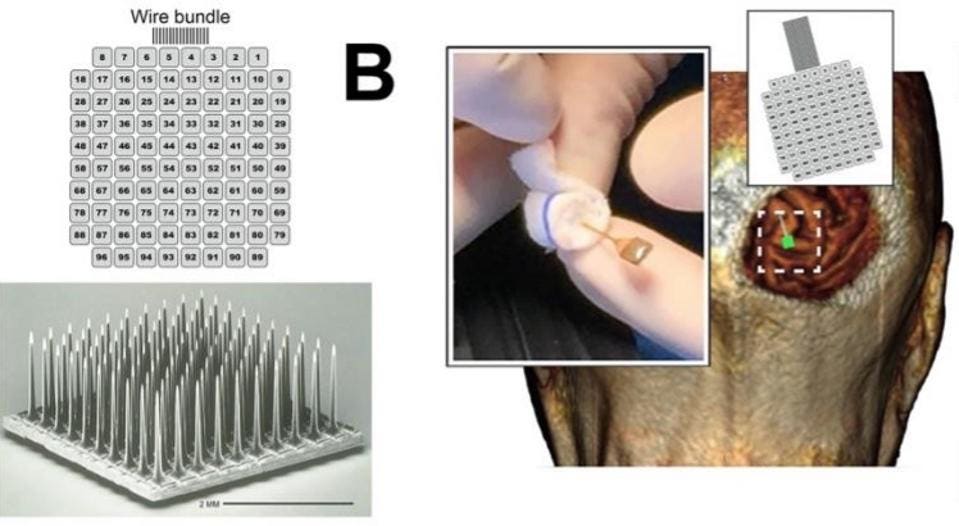 Recent experimentation provided an optimistic foundation for the penetrative electrode array system. The device was successfully implanted in monkeys and allowed them to recognize simple shapes, motions, and letters.

One of the more crucial aspects of the experiment was whether penetrative electrode arrays produced higher resolution images. To test this, researchers ran stimulation experiments with 50 pairs of electrodes. They found that in 23.6% of the stimulations, the patient saw two discrete phosphene images. Surprisingly, electrodes that were just 400 micrometers apart were able to generate separate perceptions. These results demonstrate that the penetrative electrode array can achieve distinct images with electrodes that are five times closer than what has been achieved with direct surface stimulation, marking a vast improvement from previous methods.

Fernández et al. also found that the timing of electrode stimulation could be used to produce discrete images. This could be useful when attempting to produce more complicated patterns that are recognizable to the patient.

After determining the characteristics of vision produced by penetrative electrode arrays, researchers were ready to test the patient with complex, 2D patterns. They simultaneously stimulated combinations of 3 to 16 electrodes at a time to produce patterned stimuli. The patient would then draw what she saw. The overall success rate of these pattern recognition experiments was 81.4% and improved as training continued.

Motivated by the success of these results, Fernández et al. then tested the patient’s ability to recognize letters using the same experimental model. The patient was able to consistently recognize some letters such as “I”, “L”, “C”, “V”, and “O”, but was inconsistent or unable to recognize others. Overall, her success rate for each trial always exceeded 70%.

Finally, to delve into the clinical applications of a penetrative microelectrode array system, researchers experimented with a bio-inspired retina-like visual encoder. The visual encoder is a pair of glasses that features a camera. The camera acts as an artificial retina. It records visual inputs in real-time and translates them into electrode stimulation patterns that can cause accurate phosphene visualizations in the patient. To investigate how the visual encoder could work with the microelectrode array system, the patient used the visual encoder to scan an image of black and white bars printed on cardboard. She was then asked to locate the borders between the black and white bars. They then repeated similar experiments using images on a computer monitor. After just 2 days of training, the patient was able to correctly locate features of an image 100% of the time. 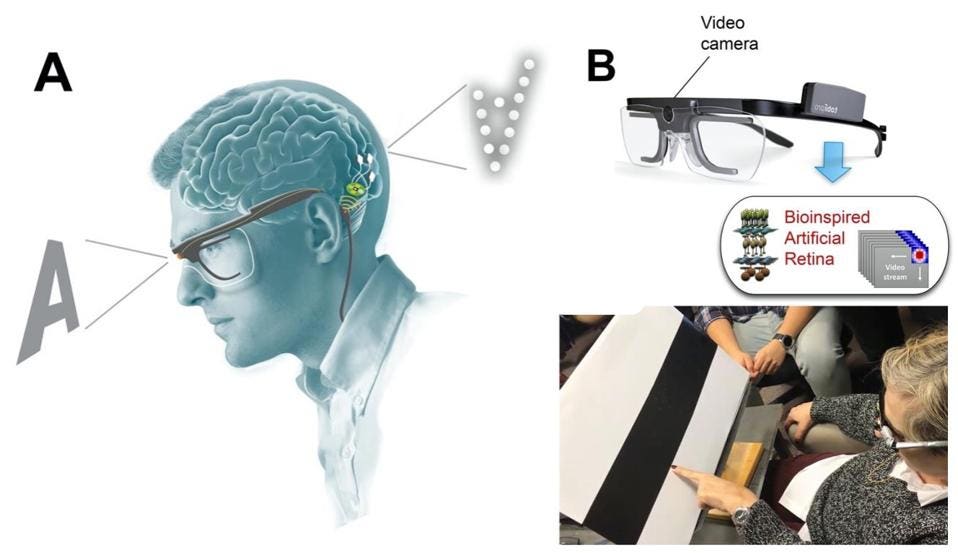 Irrespective of damage done to the structures of the eye or the retina, this study offers a direct way of interfacing the visual world with the brain. The combination of neuroscience, microelectronics, and miniaturized high-powered computation is what made this study possible. These three fields are advancing at record speeds. As we develop a deeper understanding of each field, we can anticipate substantial progress in restoring vision to those with optical damage or even to those who have lost their eyes, through the technology of direct brain stimulation.