The company is launching a pilot program today to rehabilitate people living with neurologically based partial walking paralysis. It is also raising funds via a crowdfunding program.

Pierluigi Mantovani, CEO of Evolution Devices, said in an interview with VentureBeat that he started working on the platform in 2017 as part of an effort to help his father deal with the effects of multiple sclerosis.

After his father was diagnosed with MS, he struggled to walk and he suffered some falls because he dragged his foot while walking. Mantovani was at the University of California at San Francisco doing work on neurostimulation, or electrical stimulation of nerves. His team built a first prototype and have spent years refining it.

“My dad has multiple sclerosis. He developed a walking problem pretty shortly after he had MS,” Mantovani said. “So my cofounders and I ended up building our first prototype to help him pick up his foot while he walks so that he would stop tripping.”

“We have a vision of having a more data-driven approach to physical therapy and rehabilitation,” Mantovani said. “We started helping people specifically with neurologic impairments, like my dad has, but also for those who had strokes or spinal cord injuries.”

People who’ve experienced neurological conditions such as strokes, MS, or Parkinson’s tend to drag their affected foot, but the EvoWalk uses machine learning to bypass the nerve and lift the foot at just the right time to help users avoid falls and walk more freely. Machine learning helps to learn the different walking styles of people and adjusts the stimulation of the nerves with electricity.

The goal is to help patients reclaim their lost instinctual movement.

Evolution Devices is initially focused on rehabilitating foot drop, an impairment where a person is unable to lift their foot due to muscle weakness or nerve damage and which frequently causes falls. Mantovani believes there are around four million people with the problem.

“There are over 36 million people who fall at least once a year, and it’s costing the U.S. health system about $15 billion,” he said.

Foot drop generally results from a stroke or MS. The EvoWalk remote therapy platform allows these patients to meet with physical therapists (PTs) virtually, providing them with a personalized and comprehensive rehab program to help them improve their mobility.

Evolution Devices is currently conducting a pilot of the EvoWalk Platform through Lisa Donahue, the company’s director of clinical services and a neuro physical therapist. In addition, researchers at the University of California at San Francisco are running an EvoWalk clinical study.

Earlier pilot studies of the EvoWalk Platform revealed that patients experienced up to a tenfold increase in their walking activity and improved their walking speed in as little as eight weeks.

With the EvoWalk Platform, a patient is matched with a certified neurologic PT who assesses them remotely via a secure, HIPAA-compliant video platform.

The patient receives the EvoWalk device and downloads the patient app. Dedicated PTs train the patient on the EvoWalk and develop a customized therapy program that evolves as their rehab progresses.

While wearing the EvoWalk device, the patient walks more freely as it provides personalized stimulation that lifts the patient’s foot at precisely the right times. Mobility data is automatically collected and shared with the patient and therapist and is used to refine their rehab therapy.

“Since we are collecting this data while they are wearing it, we can measure how much they’re improving, like how much a knee is bending,” Mantovani said. “Over time, we can show their speed is getting better. We have a patient-facing app where patients can see their data.”

Patients wear the EvoWalk device around the leg just below the knee. It provides functional electrical

stimulation (FES) therapy to help patients to pick up their foot and walk more smoothly. By applying electrical stimulation to the lower leg, EvoWalk acts as an artificial nerve that bypasses the non-functioning nerve responsible for lifting the foot and toes.

The patient app empowers patients by making it easy to monitor daily progress of key metrics, while the clinician app provides more detailed insights that enable PTs to remotely assess and refine their tailored rehab interventions.

One early EvoWalk user, a hemiplegic stroke survivor with foot drop, finished a 5K walk in just over an hour, shattering his goal of 90 minutes for completing the race.

Evolution Devices has raised more than $1 million in funding from notable investors including the Alchemist Accelerator and Edge Systems founder Bill Cohen.

In addition, the company has won grants from such organizations as the Toyota Mobility Foundation, Bristol Myers Squibb and Lyfebulb, the National Science Foundation, and the National Institutes of Health. 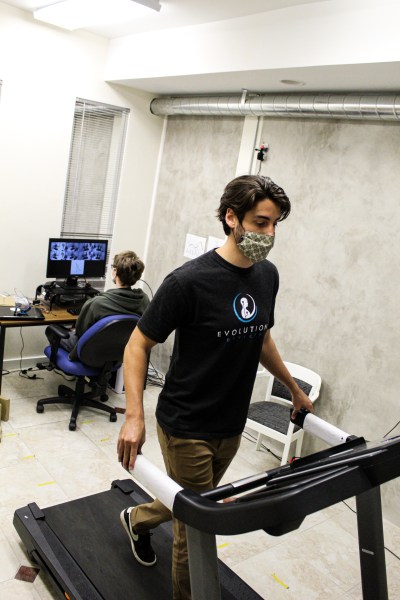 “The device tracks people’s movement over time. So they wear it every day,” Mantovani said. “It works as a therapeutic because of the stimulation. So people want to wear it. And then we get really detailed data, which helps us know how to move forward with physical therapy.”

The company’s goal is to launch in the second quarter of next year, but to do that the device will need clearance from the U.S. Food and Drug Administration as a physical therapy platform.

“He uses it pretty much every day. And every time we have a new version, he’s the first person to test it, which is nice because he can break it first before we give it to anyone else,” Mantovani said. “This is one of our hardest problems, and it really helps to have a physical therapist help someone like my dad who has a progressive version of multiple sclerosis. This can help slow the progression.”

The agency says stakeholders can use the principles to tailor and adopt good practices from other sectors to be used in the health tech...

Healthcare IT News6 hours ago

NeuraLight Emerges from Stealth with $5.5M to Digitize Neurological Evaluation and Care

The platform is ultimately meant to help accelerate clinical trials and increase the probability of success of future therapies for Parkinson’s, Alzheimer’s, Multiple Sclerosis,...

An Edinburgh researcher working on new therapies for difficult-to-treat cancers has become one of the first recipients of $20m worth of funding from an...

A freelance scientist from online platform Kolabtree has supported medical start-up Aires Medical with the development of a new oxygen concentrator.

Digital Solutions In Healthcare Plug “digital healthcare solutions” into Google, and the results are clear: digital tools have taken the healthcare industry by storm....