The best weapon in the fight against the Covid-19 pandemic remains the vaccines that have been developed with unprecedented speed. But as cases continue to surge across the globe, there remains a need for more treatments, especially those that can be introduced while people still have mild symptoms in hopes of keeping them out of overflowing hospitals.

That’s where Durham-based EmitBio comes in. It’s developed a handheld device that can deliver precise frequencies of light using LEDs to the back of a patient’s throat. For those who just have mild Covid symptoms, the device could be used at home, a contrast to treatments like monoclonal antibodies that have to be taken at a doctor’s office or clinic.

If the prospect of treating a disease with nothing more than light sounds too good to be true to you, Neal Hunter, 59, EmitBio’s executive chairman, isn’t surprised. “It’s a lot to swallow,” he says. “And from a big pharma standpoint and government lab standpoint, it’s almost unbelievable.”

But Hunter knows the potential of LED technology better than nearly anyone. In 1987, he cofounded Cree, which developed light bulbs, semiconductors and other products. Hunter served as CEO and chairman of the company starting in 1994, stepping down as CEO in 2001 and leaving the company in 2005. That same year, he cofounded LED Lighting Fixtures, which was sold three years later.

In 2015, Hunter cofounded KnowBio, which is aimed at developing therapeutic devices for a number of medical conditions. The company, which has raised $75 million in venture backing to date, has spun out separate subsidiary companies for each therapeutic area, one of which is EmitBio. The company’s technology grew out of research it was conducting to stimulate immune responses with different frequencies of light that can be emitted by LEDs. When the Covid pandemic hit, the company began experimenting to see if any frequencies had an impact on SARS-CoV-2, the virus that causes the disease, in lab-grown human lung tissue.

The company’s early results have shown some promise, finding that its LED device can reduce viral loads in the laboratory. And on Wednesday, the company announced that its experiments found a 99.99% elimination of the delta variant virus in lung cells after three days of shining the light twice a day for about five minutes. “We’ve been able to use the same technology against delta that we’ve proven effective against alpha, beta and gamma, the previous variants,” says Nate Stasko, 41, EmitBio’s chief science officer. 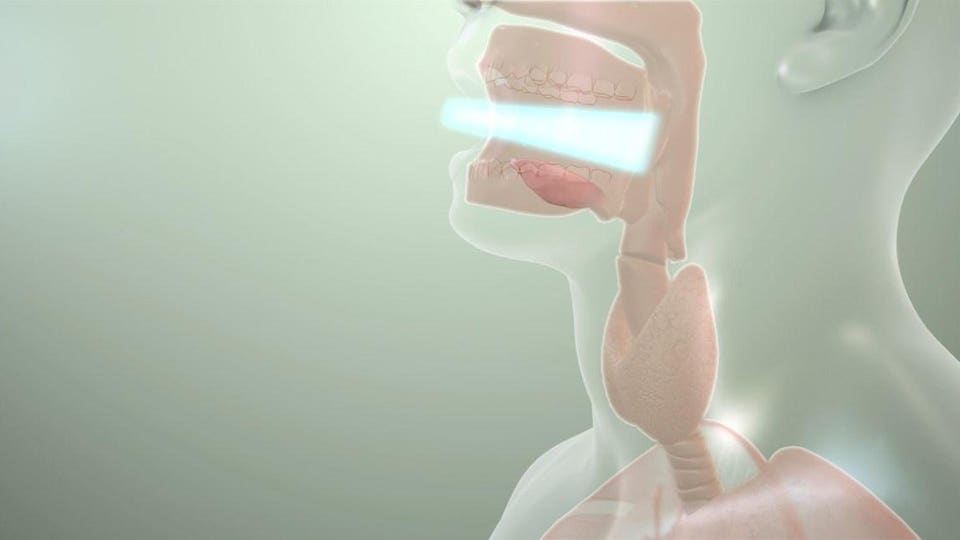 Artist’s conception of the EmitBio device in action.  EMITBIO INC.

The company has also started testing its device on people. In one recent trial, 31 people with mild-to-moderate symptoms of Covid-19 were treated twice daily for five minutes with the LED device, which shined the light into the back of the patient’s throat. This was a double-blind placebo study, with those in the control group being treated with an inactive instrument. The results of that trial, which the company released in February, found significantly reduced amounts of virus in the treated patients, and those patients also found their symptoms cleared about 2 and a half days sooner than the control group. The company has submitted a manuscript of the research findings to a journal for peer review.

Stasko explains the company believes there are two ways in which the device helps achieve these results. First is the light directly acting on the virus to prevent it from replicating. Second, the company’s data suggests the light frequency triggers the product of nitric oxide, which the body’s immune system uses for a number of different purposes, including fighting infectious disease. Outside of EmitBio’s research, there have been several studies exploring the potential of nitric oxide to treat Covid patients.

“It is a plausible mechanism, and it could help clear the upper respiratory tract of the virus, and perhaps that’s why it makes people feel better,” says Dr. Davey Smith, head of Division of Infectious Diseases and Global Health at UC San Diego. Smith is not affiliated with EmitBio but reviewed data the company had released. “I think this data is promising enough to pursue bigger studies,” he adds.

One question he has about the company’s approach, though, is how it could stop the disease from progressing in the lungs where the light can’t reach. “What we really need is something to keep people out of the hospital and from dying, and that’s really a lower respiratory disease process.”

That said, he suggests that use of EmitBio’s device might help for people who’ve been recently exposed to someone who has Covid. “The infection pretty much starts in the upper respiratory tract, so maybe that could be a useful thing,” he adds. “I do think it’s plausible enough where you just need to do a definitive study.”

The company’s currently working with the FDA on a potential emergency use authorization for its device, Stasko says, but before it gets an okay from the regulatory agency, it needs to provide more data. To that end, the company recently began another clinical study of its device, this one aiming to enroll up to 120 people with mild to moderate Covid to see if the company’s previous success replicates.

If EmitBio’s device turns out to be successful, Hunter is hopeful that his company’s device could be used to treat other diseases as well. “It also has far-reaching implications for treating all respiratory infections, because we don’t stop at Covid. We believe we’ll be able to take on the flu and some other things as well.”